Hello bookish friends! I usually schedule these types of posts in advance, but there’s been a ton of new stuff recently and I’m stoked to share my views on them!

Everyone has heard of Harry Potter, even if they haven’t seen the movies or read the books, but now, we are given a chance to actually LIVE the Hogwarts experience through a game!

I actually signed up for the pre-release so I started playing this game early! I chose the Ravenclaw house since #ravenclawhousepride and I love everything that they stand for.

What I loved about the game:

Look at her expression on the extreme left! (She’s Rowan in the game, your friend) I love how funny their expressions are and I thought of a thousand memes in my head for this!

What I disliked about the game:

Overall, if you love Harry Potter, definitely give this game a go and see whether it’s your cup of tea!

If you don’t know, I LOVE the Miraculous Ladybug cartoon series and was very excited when I heard a game was coming out!

What I loved about the game:

What I disliked about the game:

So, I’ve heard that this is one of the book to movie adaptations coming out soon and I’ve never read the books but have heard about the news on the movie.

So you might be wondering why I would discuss about a movie when I usually just do movie reviews, but there’s something very interesting about this movie particularly.

Yes, can we get a “Oh-yeah” for more POC appearing in Hollywood movies?

And also, this movie is going to be set in MY FREAKING HOME COUNTRY, Singapore! I was very surprised when I heard about it and would love to see how this movie portrays Singapore onto the big screen!

Also, the actress playing the mother is Michelle Yeoh (Hey, I have the same name, just without the h)

Okay, So I’ll definitely be checking out this movie too!

That’s all, my bookish friends, have a great weekend (I hope you plan to watch Infinity war because I’ll wait for the internet version because I don’t have friends and nobody wants to watch it with me, bye 😂)

Usually I’m really decisive, but that’s not the case with mobile phone games. I usually download it if it seems interesting and within the day if it doesn’t capture my attention enough, out it goes! But these 3 games have been on my phone for at least 6 months (or more). I am not sponsored for this post, but would like to share my favourite games with you all 🙂

(Here’s the theme song for the game! This is the rock version :D)

Okay, although not many people have even heard of Grand Chase, but this mobile game was derived from the actual computer game. I was a really big fan of this game as it really helped me through really tough times and I really had an emotional connection with the storyline and characters. Although I don’t play this game anymore, I leave it in my phone for remembrance sake, because this game will always have a special place in my heart. (And I spent $70, yes, $70 on the official comic book for this game! One reason because I really wanted to have something to remember this game by. The entire comic book is in Korean but the pictures suffice. But a lot of people really don’t understand how much this game means to me, but it’s really important.) The game lasted for 7 years before officially closing down (When I heard the news, I literally cried), but thankfully there is still the mobile version around. This is probably the longest game I had around ever since the computer game closed down. #longlivethechase

(Here’s a photo of all the characters that you can acquire/play in the game!)

I’ve been playing this game for more than 3 years! I adore this game because all the characters are so beautifully drawn! Although I’m not a fan of soccer, this is a card game and you can customise your own team to play the matches! And with the latest update, you can play this game hands free! The system can automatically play rounds (up to 10 times) for you! So you can multi-task while playing the game! Definitely check this game out!

This is the most recent game I’m playing! And this game is having a special crossover with Adventure Time! I really like this game as it makes you use your brain to defeat the monsters in battle! You have 5 characters scattered across the box-board and you have to link the character throughout the boxes to their respective colours and at the same time, have to try to erase EVERY box from the board to get a perfect attack and cause more damage to the monsters! This game is fun, keeps your brain on high alert and definitely addictive! Do check it out too!

Do you play any of these games? What are your favourite games? Let me know in the comments down below!

“Hospitals are the safest place in the world.”

Hey guys! Today I have the game review of Heart’s Medicine: Hospital Heat Collector’s Edition! I played the free trial for an hour at Big Fish Games and loved the game! 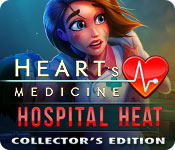 The first thing I noticed about the game, was how nice the music sounded! There was this piano piece that was played constantly throughout the scenes, but I couldn’t find it to link it here!

I like how they told the story. They started with a scene of the hospital in flames and Aliison quickly arriving at the hospital, but she falls through a hole. Then it jumps to 5 months before and tells of how she ended up in that particular moment. Also, they establish that Allison is dating her boss, and has something against her mother (which is revealed in the form of flashbacks in snippets in between the gameplay). Ryan reminded her of her former self and is quickly revealed that he is her half brother. There was a really nice character arc in the first chapter by itself!

The mini games included were really cute and fun. And most of the tasks were definitely manageable.

Let me know in the comments if you would check out this game!

Today, I have played ‘Dark Romance: The monster within’. I have always enjoyed playing the Dark Romance series, they always make me go “wait, I’ve been playing for an hour?!” and they always have the alternate Point of view where you play not one, but two different characters in the game! Both the characters will send each other items and information that will help the other character out! 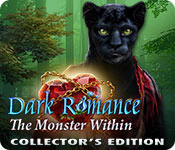 While playing the game, I was really at a loss for words when I saw how pretty the background illustrations were for the game! I also enjoyed the puzzles that were set up, they were tricky, but definitely engaging and fun to try out (If you suck at puzzles, there is always the ‘hint’ and ‘skip’ button)

The search areas in the game are straightforward and easily spotted, this makes it easier on the players to figure out what needs to be done, and the items provided were really logical in terms of use.

For this game, The monster within, I really liked the concept of game! The story tells of man who wants revenge on his friends and enemies, so he uses magic paints to paint whatever he wants and they will happen in real life. So he turns their lives into hell by painting all of them changing into animals.

I LOVED the music choice, when the scene of the house was on fire, the music was tense, and even I literally felt that my own house was on fire and was panicking while trying to find a water source while the music really tensed up the atmosphere. The music subconsciously immersed me in the game for an hour, before I was sadly dragged out due to the time limitation. The sound effects were really realistic (e.g. the fire crackling and the glass shattering)

I also liked that the game incorporated skills such as healing/medical and blacksmithing into it’s midst.

One thing I absolutely liked was that you can do more than 1 thing at a particular scene. most games only allow you to handle one task at a time (e.g. open the door with a key) but for The monster within, you are able to open the locked door AND pull the cork out of the bottle AT THE SAME TIME!

I felt that the hour was really short and I thoroughly enjoyed the game!

Let me know in the comments below whether you would try out this game!

The cadet is a bibliophile, bookstagrammer and book blogger who resides in Singapore. When she is not reading, she can be found blogging, writing, playing the violin, watching anime, movies and doing arts and crafts (And dreaming of space).

Some of her favourite authors include Marissa Meyer, Erin Watt & Jennifer L. Armentrout.

DISCLAIMER: Review copies are provided by authors and publishers. I don’t receive monetary compensation for my reviews.

Check out a ton of other book bloggers at: